MARJAN GEORGIEVSKI  is an actor, stand-up comedian and director who drinks his morning coffee until afternoon.
Do not touch me -is his morning blessing to the others.
He is a book buyer and hopes to read them all until the end of his life.
He drinks beer without appetizers, watches series, between a stupid movie and a deep sleep he always chooses the second.
He opens social networks - he curses / hates / he is sick of it.
He watches TV - he swears / hates / he is sick of it.
He likes to swear / hate  with other swearers in the company. This makes things better.
In order not to be a self-proclaimed analyst of psychology, he studies psychology.
He intends to do psychotherapy based on swearing, hating and laughing.
He is determined to immunize himself from stupidity by reading good literature every day and believes that his body reacts with sarcasm when he meets supporters of primitivism.
He is the father of a minor and a participant in a marital status.
He moves on the board between fantasy, and reality bites it to the bone.
GOLD TOOTH COMEDY ROOM  is the place where we can be real, funny, hard core brutal, without mask, without disinfecting the truth.
Debate in the right way, only with comedians, people who have decided to see their lives through the visor of the bright side.
We are interested only in humor - the rest is painful and pathetic.
Welcome to the GOLD TOOTH COMEDY ROOM 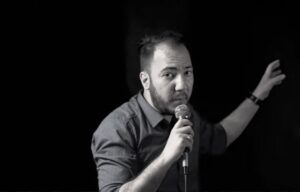 He graduated in Skopje.
He gained popularity in his childhood through the cult TV series "Nashe maalo" (Ice) and "Golemi mali" (Konde).
He had more than 500 stand-up performances in Macedonia and the Balkans.
In 2012. becomes the first Macedonian comedian to perform in Croatia in the most renowned stand-up club in the Balkans "Studio Smijeha" - Zagreb.
In 2013. performs at the most renowned stand-up festival in the Balkans "PUNCH" - Zagreb.
In 2015. starts the first stand-up tour in Macedonia "TOUR DE STAND UP" in theaters and houses of culture in 20 cities throughout the Republic, which ends with a grand finale at the ARM House in Skopje.
In the years 2016/17/18 he realized the largest number of commercial performances in Macedonia.
In 2017. performs for the Macedonian community in Croatia.
In 2017. Bojan presented his new One man show, entitled "Just Married", material with which he once again distributed the ARM House in Skopje.
Bojan's humor covers topics that are most dear to him for processing, such as: male-female relationships, music comments, lyrics and songs from various genres and styles, people's characters, events from his own everyday life and environment, comments and jokes on his own account , women as a separate topic, etc. 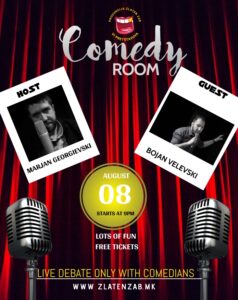