ANA ZLATANOVIC is originally from Obrenovac.
She has a very colorful family and is ready to talk about them.
She graduated from the Faculty of Security and a master's degree at the same.
In her life she was everything - she defended Serbia from terrorism as an operator of the counter-diversion control at the airport Nikola Tesla, she listened to the complaints of the users in the call center, she worked with tourists at sea ...
2013 started with stand up.

JELENA MANDARIC is from Alibunar and a laboratory assistant by profession.
She started her stand-up career in Zagreb. She tries to point out all the comic elements to the detriment of her character, appearance, idiosyncratic features of her whole personality.
You have to be very strong for this kind of humor and Mandaric is as strong as a rock! 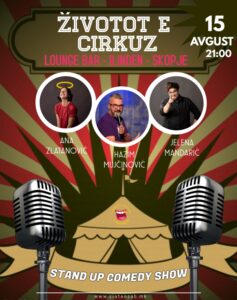