Before the New Year stand-up show LIVE with SRDJAN OLMAN * SHOULD I HANG MYSELF, OR SHOULD I CONTINUE FURTHER?! *
Laughter is a powerful stimulant that has a positive effect on overall health. It can significantly improve our mood at a given moment. It is one of the most powerful weapons in the fight against stress.
On the topic of corona, quarantine, healthcare in Serbia, how not to hang yourself from this year's events, as well as healthy eating, travel (when allowed) and many other topics will make you laugh to tears in the latest stand-up show from mega popular Olman.
Tickets are limited (150) at a price of 2 euros in pre sale and 4 euros on the day on the event . Replay Access until 02.01.21 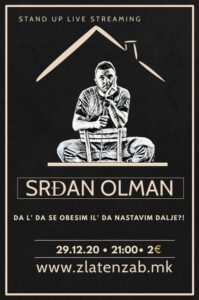 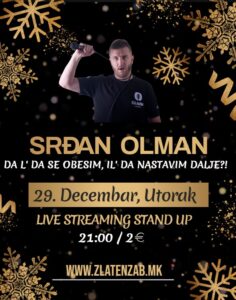 SRDJAN OLMAN
After 8 years of journalism on local television, Srdjan Olman goes into the world of stand-up comedy, from which he lives to this day. His one man stnd up shows "Northern Ice Humor" (because he comes from the north, from Subotica), and "Justice for Olman" traveled all over the region. Srdjan Olman is the winner of the TV show "Serbia's Best Comedian" for 2014. He is also the winner of the competition for the best stand-up comedian organized by Standap.rs. He also participated in the TV show "Audition". He is the author of an online comedy series "Drago's Wisdoms", in which he plays the master Drago Majstorovich, which can be seen on the YouTube channel, as well as a whole series of comedy videos on the topic of Isolation.