Ivan's main themes are members of his immediate family: his wife, children and credit.
Playing several characters at the same time in situations from everyday life, from television and from the theater, Ivan reveals:

What happens when a loan goes to primary school?
What do cartoon synchronization and the Hague tribunal have in common?
What is the connection between the winner of the Mathematical Olympiad and the prochrome?
Can a Serbian folk song be translated into English?
What are the secret strategies of health food stores?
How to properly tread flowers in front of the City Assembly?

Ivan Tomic is an actor, stand-up comedian and TV presenter. In the last few years, with his stand-up comedy "Uncle Tomic's cabin", he is performing in Serbia, the region and Europe. 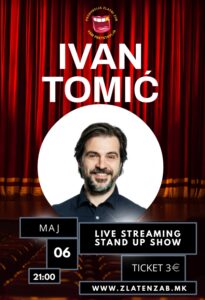