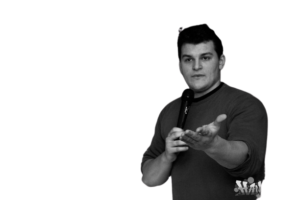 Originates from Mirkovci near Vinkovci.
Philosophy student (incorrigible romantic, hyper-active and extravagant).
He lives and works in Zagreb.
He has been training karate for 20 years. He is a holder of the black belt 2. Dan and is the coach of the Karate Club "Tempo". Master in karate (although he does not even know how to change a light bulb at home).
He also practices boxing, wrestling and mixed martial arts - he fought in the MMA cadre, but he does not like violence.
From an early age he visited drama groups, played in various plays such as: "AND WHO ARE YOU?" at the EHO drama studio directed by Svetlana Patafte.
After the death of the most famous comedian Robin Williams, he decided to deal with stand-up.
It started with open mic performances. 4 years ago he had his first stand-up show "Duty Guilty". He has been doing stand-up comedy for 7 years. Says: Standup is always useful to talk about forbidden things. Apart from clubs, he also performed at weddings, birthdays and girls' dinners. He acted as a registrar at a wedding, a police officer at a birthday party and then performed. One of his worst performances was in a nursing home. Most often he opens the evenings for stand-up comedy (breaks the ice) and they say that he would create a great atmosphere in the cemetery as well.
Recites poetry, hosts various programs, quizzes and animations.
He is the frontman of the group "Hladovina", a band that is still looking for its style.
Knows how to avoid tram control and good crochet.
On June 9, 2020. became Zoran's father.
He is afraid of snakes.
His hobbies are eating fast food and watching Youtube videos and daydreaming.
He loves burek and his wife the most. He is a big gourmet, he likes to cook, but he does not like to wash dishes.He loves everything except mushrooms. 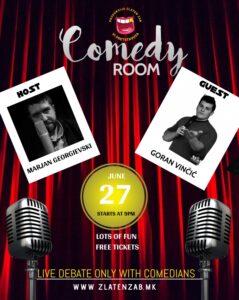