MARJAN GEORGIEVSKI is an actor, stand-up comedian and director who drinks his morning coffee until afternoon.
Do not touch me - is his morning blessing to the others.
He is a book buyer and hopes to read them all until the end of his life.
He drinks beer without appetizers, watches series, between a stupid movie and a deep sleep he always chooses the second.
He opens social networks - he curses / hates / he is sick of it.
He watches TV - he swears / hates / he is sick of it.
He likes to swear / hate  with other swearers in the company. This makes hings better.
In order not to be a self-proclaimed analyst of psychology, he studies psychology.
He intends to do psychotherapy based on swearing, hating and laughing.
He is determined to immunize himself from stupidity by reading good literature every day and believes that his body reacts with sarcasm when he meets supporters of primitivism.
He is the father of a minor and a participant in a marital status.
He moves on the board between fantasy, and reality bites it to the bone.
GOLD TOOTH COMEDY ROOM is the place where we can be real, funny, hard core brutal, without mask, without disinfecting the truth.
Debate in the right way, only with comedians, people who have decided to see their lives through the visor of the bright side.
We are interested only in humor - the rest is painful and pathetic.
Welcome to the GOLD TOOTH COMEDY ROOM 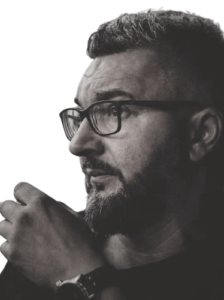 Born 31.05. In 1977 in Vlasenica (BiH), lives in Tuzla.
Graduate actor.
TV and radio host (more than 10 years, host on TV and radio media, morning host of "Morning for All" -BHRT and radio host and editor of the morning show on radio Kameleon - Radio Morning with Hazet).
Actor and executive producer at the Tuzla Cabaret Theater (responsible for festivals and plays).
He works as a producer of the Bosnian Cultural Center (BKC) - Tuzla Canton.
Film and TV actor in:
TV series:
- "Crazy, confused, normal" (2011)
- "We are two different worlds" (2011)
- "Head through the wall" (2016)
- Ljubav prema knjigama: Priča o Sarajevu / “The Love of Books: A Sarajevo Story” (2011)
Producer and stand up artist (more than 7 years) in "Stand Up Comedy Made in Bosnia".
Father of two beautiful boys and a girl, husband of one wife. An actor by birth, commitment, occupation, diploma and desire. A stubborn Bosnian who wanted, wanted and became an actor, and then the world turned into a porn industry.
See the rest of the story right here. 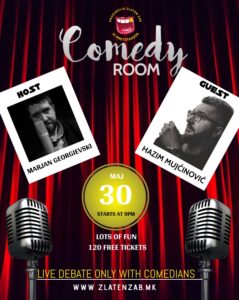