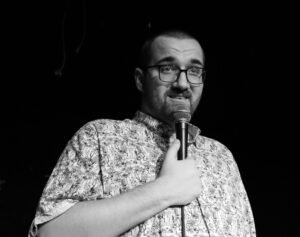 Omer Hodzic is a 28-year-old Stand Up comedian from Mostar. He has been doing Stand Up comedy for 8 years. He has more than seven hundred performances all over the Balkans, and some in real Europe. Among other things, he performed in Sarajevo, Tuzla, Banja Luka, Zagreb, Split, Rijeka, Belgrade, Novi Sad, Subotica, Podgorica, Maribor, Ljubljana, Budapest, Vienna, Zurich and many other smaller cities and towns..
He was part of the 3 in 1 Stand Up Comedy TV program originally recorded for TV 1, which was later broadcast on numerous other cable TV stations. Omer Hodžić was the author and host of the first political and social satirical TV show "Monty Dayton Show" thirty episodes aired on television.
He also works as part of the Mostar satirical group Onomatobleja, in which he is one of the authors and actors of the radio show of the same name, which is broadcast on ROM as part of the program Another Name for Freedom, Abraš Radio. The show already has more than 100 episodes. With Onomatobleја, he created and performed a multimedia play called Election Trouble (2018). In 2019, he created the Onomatobleja Show - a play with over 50 performances throughout BiH. In 2020, Onomatobleja received its third show with a similar name, but completely different in content from the previous one - Onomatobleja Talk Show.
As part of the Radio Geometry program of Abraš radio, which is also broadcast on ROM, he is the author and host of the program Comedy with an attitude - a show about Stand Up comedy. Showcase format with colleague Mirko Komljenović Mirkan, or Igor Drlja. In addition to his performances, he is also the organizer of numerous evenings of Stand Up comedy throughout BiH for both domestic and regional comedians. Before he became addicted to laughter and Stand Up comedy, he was involved in hip hop music and considered himself a rapper. Fortunately, he grew up and is no longer involved in hip hop music, although the hip hop form is represented in his comedy work. He also graduated from the Mechanical-Traffic High School, which was a complete success since he still does not have a driver's license. It has indexes from several higher education institutions but has not completed any. Still.
Omer's performances are provocative, politically incorrect, and some say funny. 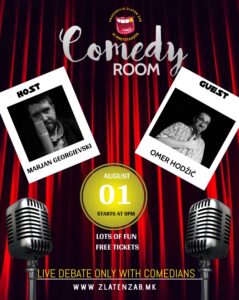