All citizens of the city of Probishtip and the surrounding area by all possible protocols (masks, distance and disinfection) are invited to choose which vaccine to be vaccinated against stupidity, politics, tic tok, textbooks, Chinese and bats, Bill Gates, 5g, from male nonsense , from female nonsense, from influencers, from laziness, from envy, from gossip from News on TV, from makfest in Shtip :) and from everything else that bothers you. Vaccine is coming. 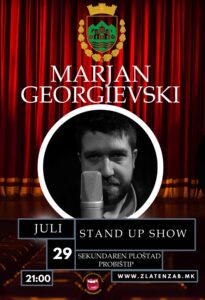 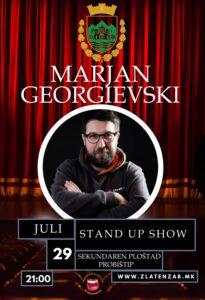 Graduated actor, master of theater directing, stand-up comedian, student of Psychology.
Employed as an actor in the National Theater in Bitola and regularly plays in the plays in the repertoire of N.T. B.
He starred in the TV series "Hardliners" and the films "The Balkan is not dead" and "To Balchak".
He is actively involved in stand-up comedy (with more than 700 performances throughout Macedonia).
Uses the media to create content related to stand-up comedy, analyzing how the system affects the individual in society.
Writes screenplays for TV shows, plays and the book "Me and you" (2021)