Vladislav Ilic is a young man originally from Kumanovo where he worked as an amateur actor in drama circles in Kumanovo.
He met stand-up comedy in Malta, where he began his interest in this type of comedy.
2017 moves to London where he begins to work more seriously in the field of stand-up comedy. Before winning the first prize, he performed four times a week in English clubs. He says that he does not limit himself to what he says, and Stand-up comedy is engraved in his heart and he blindly believes in the idea and the message to give a smile to people who seek relief from everyday worries.
So far he has won several important awards – “King of the Gong” in the world famous club “Comedy Store”, three times winner of the competition “One to Watch” in the oldest club in London “Up to Creek”, winner of the competition “Get up – stand up” -where he won the “Comedian of the Year” award at the Piccadilly Comedy Club, which is one of the toughest competitions with more than 700 participants, and among others won the “Max Turner Price” award.
After two years of performing, Vladislav or Vlad as he is better known there, got a chance to perform before a jury of talent agents and signed a three-year contract with the well-known Blue Book Art Management Agency.
In October 2020. had his first appearance on BBC1 TV. The performance is available on the BBC i-Player platform throughout the United Kingdom all year round. The performance is part of the “Stand Up For Live Comedy” series – a BBC 3 project – which seeks out the latest undiscovered talents and gives them a chance to perform on their platform.
Next from Vladislav Ilic together with the production Golden Tooth will be his online stand-up performance for the Macedonian audience. 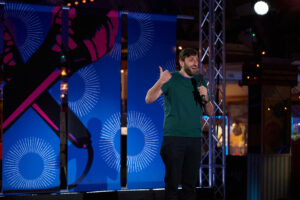 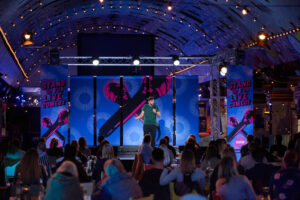